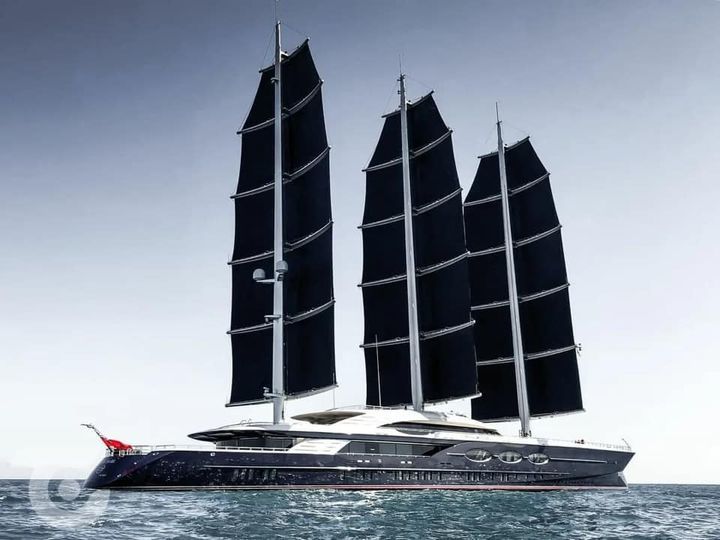 Oleg Burlakov invested money from the oil business into a sailing yacht powered by solar and wind energy. Using the same technology, he intends to build a barge and offer it to large car manufacturers

All 100-meter yachts feature some kind of novelty and are described as “innovative” or “groundbreaking,” Superyachttimes pointed out in April. But Black Pearl’s owner wasn’t satisfied with that, noted Superyachtimes: “He wanted to create what will undoubtedly be one of the most iconic projects in the industry.

The owner of the 106m Black Pearl, which Superyacht Times has written about so well, is the businessman Oleg Burlakov. He made his fortune, which according to Forbes estimates is $650 million, from cement trading and oil production.

Burlakov spent more than 250 million euros on the “Black Pearl” (150 million euros were loans from European banks). And this is just the “technical side”, the total investments in the sailing ship can be up to 400 million Euro.

“The boat is not for entertainment,” Burlakov emphasizes in a conversation with Forbes. According to him, the goal of the project is “to create ships that will have new sources of energy and new possibilities.”

Burlakov has been fond of ship modeling since childhood, and the idea of creating his own boat “came and went for 20 years.” Until 2005 when the businessman came across the news about the first flexible liquid crystalline solar panels. The Forbes list member, who has a PhD in energy sources, had the idea to use solar panels instead of sails.

To realize the project, Burlakov found a like-minded British designer, Ken Freivokh. In 2006 the yacht Maltese Falcon designed by him caused a real furore at the Monaco Yacht Show. The unique system of 15 square sails unfurled in just six minutes. A similar sailing system is now installed on “The Black Pearl”.

The uniqueness of the project is that flexible solar panels are integrated into the fabric of the sails, Burlakov explains. And when the boat is moving, energy can be “taken off” from the propellers, which rotate due to the oncoming flow of water.

The technology can generate up to 1 MW/hour, Burlakov says. This provides all the power consumption on the boat, and the “excess” is pumped into the batteries, Burlakov explains. The capacity of the batteries adds up to 10 hours of autonomous operation to the life support, navigation and air conditioning systems. Using energy to propel the boat is unproductive: at high speeds, the batteries will run out quickly.

According to Andrey Boyko, the founder of Burevestnik Group, there is an alternative to internal combustion engine: yachts with hybrid engine. Their prime cost is still high, but they are much cheaper to operate. Such yacht with 50 m length and speed of 8-9 knots consumes a little over 100 liters of fuel per hour, while analog with internal combustion engine consumes 4-5 times more. The solar energy project may turn out to be promising, Boyko does not exclude: “If the economy allows it to be replicated.

Preliminary agreements have been signed with all three interested parties. They are also ready to provide financing. Burlakov will need $100-150 mln. for the new project. The launched cargo ship on sails will cost $50-60 mln., the businessman expects.

Ships powered by alternative energy are usually slow-moving, says Gennady Yegorov, general director of the Marine Engineering Bureau: “Their limit is 10-12 km/h. This is not enough for fast cargo vessels with 4-5 000 vehicles, which have a speed of about 30 km/h. Solar batteries can be placed on the roofs of cargo ships and use the energy for life support, Egorov argues. This would reduce some of the emissions, he continues: “Alternative energy is a positive factor, but not a complete substitute.”